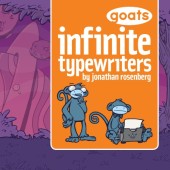 Jon is someone I've admired for many years. Goats was one of the first webcomics, and I became a fan at my very first San Diego Comic Con when I was contemplating making my own comic strip. Watching his art and writing mature gave me hope for my limited skills, and when he quit his day job I became more convinced that I could do the same.

Goats collections are now being published by Del Ray. Gene, Jana, and I have all been enjoying the first, Infinite Typewriters, which just came out a couple of weeks ago. Sometimes rude, sometimes sweet, usually random, and always brilliant, Infinite Typewriters and its upcoming sequels belongs in the graphic novel section of every library.

Jon is also a tremendous pain in the ass, and getting this guest strip out of him was like pulling teeth from an evil chicken. But well worth the struggle.

Oops, Jon Rosenberg's Unshelved Book Club was taller than we usually have, and I forgot to tell the website. The result was one very squished strip. It's now fixed on the site so go have another look!