Update: Preorders will begin later this month. Contact Gene for more information, or to be notified when preorders begin. 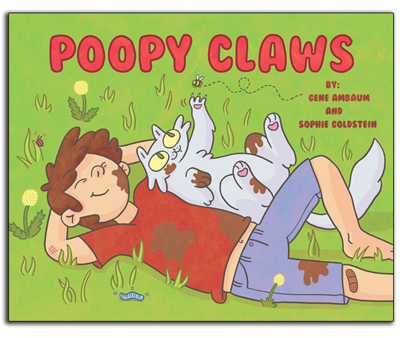 Today I'm proud to announce my new kids book, Poopy Claws. It's a short, all-ages graphic novel by me and cartoonist Sophie Goldstein(NSFW), co-creator of Darwin Carmichael is Going To Hell(NSFW).

As the cover suggests, it's about a boy and his cat and his cat's poop. But that's just mud on the cover.

I really love independent, creator owned comics. I like going up to an artist's table at comic conventions like Stumptown, ECCC, or APE and finding comics that surprise me. These books are things I know I'd never find at a store, and they feel very personal. And they made me want to create something similar.

I grew up on my grandmother's hospital stories. Her poop stories were the best (by which I mean the worst, but also the funniest). Her cats had an overflowing box. I got to thinking about my cat, Tokyo, and the fact that he almost never cleans his paws...

So I wrote a story about a boy and his cat that won't poop in its box. I waited until I met Sophie, who had the the perfect style to illustrate it. And now, after all of her hard work, the book is on its way.

It's a beautiful hardover complete with colorful endpapers and pictures of our cats.

We're also creating 100 signed and numbered artist's editions with a custom drawing by Sophie, who I believe is destined to take over the cartooning world.

Please head over to the Poopy Claws page for more information on the book, including a preview, as well as links to Sophie's work.