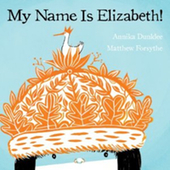 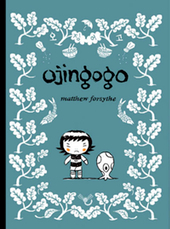 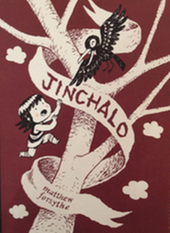 I’m a huge fan of Matt Forsythe’s Korean-flavored comics Ojingogo and Jinchalo, and his first kids book, My Name Is Elizabeth, was one of my favorite picture books last year. His next picture book should be out in 2013.

I interviewed Matt during TCAF. It was a little hard to find a quiet place in a library filled with thousands of comics fans, but we evaded security and hunkered down between a wall and a quiet study area to talk about picture books vs comics, design, and living in Korea.

Matt: This year I wanted to focus on work. But you get here [to TCAF] and everyone you love is here, everyone you respect, you know.

Gene: Was My Name Is Elizabeth your first kids book?

M: Yeah.  And because that book did really well, I’ve got a two book deal with Simon & Schuster. The first one I’m illustrating, and the second one I’m slotted to write, too.  The first one should be out in spring 2013.

M: Well, I think I’ve been on a steep learning curve. I was working full-time until last year basically, doing something completely different. And so this is something that takes 150% of your time, being an illustrator.

Ojingogo took me a long time to do, and it was long enough that it allowed me to make a bunch of mistakes and have some fun successes and just wend my way into eventually having a book.

But when you have a kids book you have a very tight deadline, there are a lot of constraints with the editor. The editor is conductor of the orchestra, and you have to deliver quality stuff really quickly. I wasn’t disciplined enough or skillful enough to do that. I wanted to take more time and use my old process, but I didn’t have that freedom. When I delivered my roughs I think they were really sloppy and loose because I wasn’t thinking about what would be best for them. I’d only ever worked for myself.

M: The tighter they are the better it is for everyone. It’s easier for me to go to the final stage, and it’s also better for them to show the salespeople. I was naive. I didn’t understand the ecosystem in which the editor is working. She has to get the salespeople enthusiastic about her book ‘cause she’s competing with other editors and their books, even internally.  Maybe “competing” is the wrong word.

M: Yeah, sales and internal budgets and stuff. And when I was doing it I thought everyone’s getting equal attention, the quality of the work will stand. But they’re on schedules. They have to deliver. They’re a business and they have to have a certain number of books per year and they can’t wait for artists. These are all things that I’m just learning.

G: I live in the library book market. And it’s heartbreaking to see how many great books don’t even get a spot on the table at a library conference. My Name Is Elizabeth did, but I never thought about what’s involved in getting that spot. Each company is probably different. But even small publishers don’t have room to show all of their books. It’s a strange ecosystem because there’s so much content coming out and it seems to be largely about what’s new this week. High quality can win out, too, but it’s both an internal fight at the publisher’s plus an external fight for attention among all the other books that all the other publishers are putting out.

M: I’m also learning about this, you get to a level of sophistication with illustration, there’s a certain level of illustration that I’m excited by that’s artful and sophisticated -- and then I’m coming to terms with the fact that that’s not always what’s best for the kids market. And I know editors know that immediately and librarians know that immediately and parents know that, too.  Some of my friends who are parents tell me, “Yeah, that’s a beautiful book, but you can’t read it to your kid. It’s going to bore them” Right? Some of the top illustrators are doing really boring books. And I’m just learning about all of this stuff. I find it really fascinating.

One tries to keep in touch with what one loved as a kid, but I want to grow as an artist and get better.

G: You did an amazing job of making My Name Is Elizabeth much more than I thought it was going to be. Based on the title I wasn’t sure what it was going to be. But as I went through it, it’s a great book to read to my daughter. (We like picture books as much as we like comics, even though she’s nine now.)

M: What made you enjoy it?

G: Your art felt kinetic even when there wasn’t a lot of action, in a way that only someone who does comics can pull off. A lot of picture books feel very stayed, like a series of still pictures. When Elizabeth shouts, “My name is Elizabeth!” and she’s a giant and she has a big word balloon, that little bit of comics worked. But the fact that she had just popped up and was larger than life, larger than the city, screaming -- that was a great sequential moment without all of the step-by-step moments a comic would have. It’s one of my favorite moments in picture books for me.

G: I feel like your comics have a sketchbook quality. They feel like you’re dreaming and figuring out which way the story is going to go.

M: That’s exactly what they are. They aren’t written in any conventional sense. It’s very vague if there is [a plan], and I pay for that. I suffer for that, and the work suffers. But it is what it is.

G: Don’t you think that looseness is what attracts people to the work, too?  For me it has a dreamy quality, but there’s also clearly something going on that I’m trying to figure out. I feel like the great thing about Ojingogo and Jincharo is that I have to try to figure out that puzzle, but I feel like there’s enough there that I can walk along that path with you.

M: I didn’t know, when I was doing Ojingogo, I knew that it worked on some levels and I didn’t know why. And now I think I have a better idea. What I was attracted to is the idea that the reader is the main participant. I think that’s what great comics and picture books are. The excitement of what’s happening is happening in the mind of the reader and not solely on the page. So when people are like, “I don’t know what’s happening,” sometimes it means you have to engage more.

I just saw this great documentary on Milton Glaser, the great designer who’s most famous for I (heart) NY. They ask him why did that take off of all of his work. And he said that it’s because people love to solve a puzzle.  Great design lets the reader solve a puzzle.

To a different degree, I think that’s what it all does. It’s all about the reader and the viewer and letting them put things together. When they talk about text not matching the image in books, and the image really has to bring something different, there’s some energy between the text and the image, you know? That’s something I’m just getting my head around.

I did a little book with Koyama press called Comics Class and its about me teaching this class about comics. All I’d done was Ojingogo and I had to think through all this stuff. They were grade eights. And this comic is an exaggeration of what happened. People received it really well, if you’ve ever worked with kids.

G: I see what you do so well in your comics done so badly in other places. I’m thinking about those dream sequences or sequences of the mind in mainstream superhero comics. I feel like those lack the relaxed pace that you bring to it and the sense of wandering around in your imagination. I don’t think it’s a good comparison in some ways, but it’s in the same wheelhouse.

M: I was living in Korea when I started Ojingogo. Also when I started my real illustration career. It rebooted my interest in comics and cartooning. You lived there too, right? You know the cartooning culture is everywhere.

G: It’s amazing. The level of talent in the kids picture books is insane.

M: Oh my god! I’d be looking at these books and going, “This is what I want to do. I want to make books like this that are beautiful.”

G: It’s such a rigid culture. The standard picture book techniques are different from the techniques here. But you could see it executed flawlessly. And you could pick out the one that had great heart even though you couldn’t understand it. I have a collection of books from there and I just love the textures and the way things move on the page.

M: The graphic nature of Hangul [the Korean alphabet] is beautiful. It’s beautiful design. It’s sequential art in itself. I would just buy comics, manhwa, and I didn’t care that I didn’t understand it, I could get what was happening intuitively. And I just started including it in my webcomic. That was about the time that there was a manga explosion here, and people felt more open to the idea of that kind of stuff. I think some people think I’m exploiting [the connection] or something, but I just love the graphic nature of [Korean].

G: It hit over here right about the time my daughter was starting to read. My daughter is half Korean, so it was fantastic to read Ojingogo with her, to look at it and talk about what was happening in the book. There are bits of Korean culture that come through. I feel in a weird way that Korean culture is invading North America but very slowly. Like Lady Rainicorn in Adventure Time speaks Korean, and suddenly my kid is the only one who understands it. I feel like it’s a great time to be her.

It’s funny to me that your characters speak in little bits of Korean and there’s even some Hangul.  Do you get a reaction to that?

M: I think it puts a lot of people off. Some people say that this isn’t English, you’ve given me the wrong language. But I think a few people get what I get out of it, that it’s a beautiful graphic language and there’s something intuitive about it.  And that if you don’t understand it it’s not important.  And also there’s that whole thing, that idea of alienation. When you live in Korea you don’t understand anything at first. It’s wild. You feel like a child again. It’s a beautiful experience. And I wanted to put a little of that in there.

G: I compare it to Lewis Trondheim’s A.L.I.E.E.E.N., because no one understands the alien’s language in that. But I understand enough Korean that I get the sense of being in on a secret when I read your book. It’s nice for my family because they get it, too.