In this week's Unshelved Book Club you'll find books about a state trooper's final showdown with a powerful vampire, a runner trying to cope with losing a leg, devices that enhance brain activity, a high school student destined to die in the next year, a violent folk hero, copper, and a ten-year-old bounty hunter.

At TCAF, I got to spend a few minutes chatting with the German writer/artist Arne Bellstorf, whose graphic novel Baby's in Black: Astrid Kirchherr, Stuart Sutcliffe, and The Beatles in Hamburg had just been published by First Second. You can read my interview with him below. 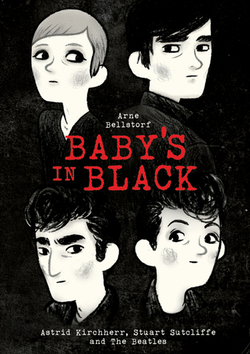 Arne: Baby’s in Black is my second book. But it’s my first one out here in North American.

Gene: What was your first book about?

A: A coming of age story about growing up in the suburbs of Hamburg. It was inspired by my own experience. Maybe it doesn’t have an international appeal. I know that it’s only because of The Beatles involved in the story that it’s...

G: Is that the only reason? Baby’s in Black has excellent art, too. Does your first book have the same black and white quality, the same quality of lines?

A: No, it looks different. It’s black and white it has grey shades but it doesn’t look like Baby’s in Black. I didn’t use the crayons back then. [They make the blacks look] really strong and greasy.

G: It’s not digital black in your book?

A: No. For the outlines it’s just ink, and the rest is a type of crayons.

G: Why don’t you talk about the look of Baby’s in Black. It’s a book set in the 1960s in Germany, and you have very heavy blacks in a lot of places, but then the dream space has a lot of white.

A: I didn’t use the crayons for these [dream] scenes. They’re only the [ink] lines.

G: How did you make that decision?

A: The idea was to have Astrid’s aesthetic, her black-and-white world. It’s her story and it’s told from her perspective, so I wanted the book to look like it had been drawn by Astrid. She also liked the black and white moves of Jean Cocteau, the French movies, so it was clear the book had to be black and white.

G: Your book surprised me. In other black and white graphic novels that work for me, the lines look very different. And you have a lot of not-quite-filled blacks.

A: I tried to use the whole scale from white to black. There are grey shades. For the dream scenes I would only have the outlines. I would have very strong, plain black areas for the clothes. I tried to make use of black and white full scale.

G: I wondered if you had imagined the black space and the white space first, and then drawn the other objects in.

A: Yes. The outlines were always first. And then I decided where to put the black and the grey also.

G: What attracted you to the story?

A: It took me a year to develop the story and do the research and tell Astrid about everything. Then another year to write the story and storyboard. And then a third year to finish it.

In the beginning, there were Astrid’s photos that I saw. And then I was just interested in the youth culture in Hamburg at that time. The art student scene was inspired by French culture and existentialists. I didn’t know about that, that the French had such an influence on young Germans. Astrid’s generation, they were the post-war generation, they were the first young adults who had to build their own culture again in the bomb sites in Germany. They avoided to be German, they weren’t interested in German culture, that’s why they were looking towards France. The British people came with North American culture. There were a lot of influences coming in to Germany.

Astrid always said that she really felt guilty. She grew up during the war and it must have been really difficult to be German back then. Still, you know, people [now] link Germany to Nazis, but in 1960 it had just been 15 years, cities were still not, you could still see the war was still present, everything was destroyed and Astrid always was complaining about the older generation, these were the Nazi generation, they were still there and so there was a real urge to fight against their parents and the German culture. Everything that they grew up with, they just avoided everything.

G: That explains the scene a bit to me. I’d never understood why The Beatles and all these other bands were there at the time playing non-German music.

A: That was the right time to do that. Nobody wanted to hear German songs, especially the young people, they were interested in everything else.

G: Was she very easy to approach about the story?

A: Yeah, after a while. I told her I wanted to do the story told from her point-of-view and that I didn’t want to focus on The Beatles. We spoke about her background and what it was like being a young German at that time.

G: How much fictionalizing did you do? I’m thinking about a lot of conversations in the book.

A: You cannot really divide what’s fiction what’s nonfiction. I tried to have all the facts. The Beatles came and played, and all the stages of their career. George was then sent away because he was underage. All of these things are there. Facts. But with Astrid and Stuart I didn’t have these kind of anecdotes, it was difficult to develop the love story. That’s why I spoke to Astrid about that and she was quite helpful with the dialogue. I wrote the book. The love story I imagined, but always having Astrid in mind because I know her now and I know how she behaves and how she speaks so I tried to capture something of the real Astrid. And I read a few of Stuart’s letters, so I had an idea of…

G: Was he the love of her life?

A: She was married twice after Stuart. But she still says she never met another man like Stuart, so this was an important thing to help the story, a really romantic and tragic love story. It was love at first sight and they got engaged after only one month and they wanted to get married as soon as possible. So they were really really romantic and deeply, deeply in love.