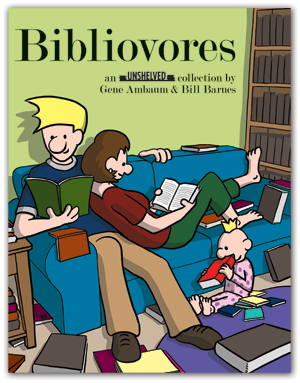 We are excited to announce the new Unshelved collection! Bibliovores begins where Too Much Information left off, with the birth of Dewey's adorable daughter, Trillian. It also features:

In addition to daily comic strips from our site, Bibliovores features Dewey's Secret Origin, Conference Tips, and the 12 page classic comic epic What Would Dewey Do @ BEA?

It's the same compact size as TMI and Large Print, but this time around we have six months worth of color strips. Don't worry, we kept the same price - $11.95 (just $10 if you order it with one or more t-shirts and even less if you buy it as part of a book bundle). All copies will be signed by Gene and myself, plus I'll doodle Trillian in the title page. For superfans willing to pay extra, I will spend ten minutes drawing anything you want on the title page in pencil and ink, so long as it is legal in the state of Washington.

Because we love feeding our kids and paying our mortgages, we have an incentive for you to buy our book sooner rather than later: order by July 1 and we'll throw in a pack of Unshelved postcards featuring our five favorite Unshelved covers.

Most orders will ship out in early July, after we receive them from the printer. But we have a few advance copies, and so as an additional incentive to order now we will randomly pick three orders placed by June 10th and send those copies right away.