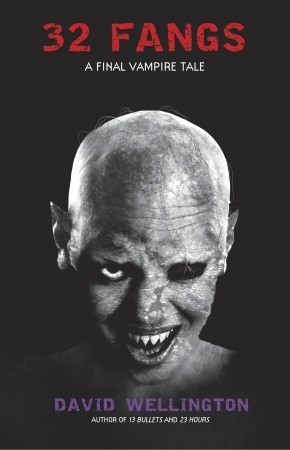 My favorite horror writer, David Wellington, has a new book out later this month, and we're celebrating with a contest!

32 Fangs is the fifth and final book in his vampire series of which I’ve been a fan since I picked up the first, 13 Bullets, at BEA several years back. It immediately pulled me in because Wellington’s vampires are fast, frightening, and incredibly brutal. (You can get an idea of what they’re like by watching this, though in the books they have more teeth.)

The arc of the main character throughout the series, Pennsylvania State Trooper turned vampire hunter Laura Caxton, is absolutely amazing, as is the trap she sets for the last vampire in this final volume. So, to enter our contest, describe the ultimate vampire trap. Entries must be submitted via Twitter, fit in a single tweet, and contain the hash tag #32Fangs. Mine would be:

A bucket of holy water, a Korean dinner (for the garlic), a bear trap, a plane ticket to Antarctica. (Call me when it’s over.) #32fangs

We’ll pick our ten favorites. Two grand prize winners get a set of all five books. Eight runners up get a copy of 32 Fangs. All copies of the new book are signed by Wellington, and are courtesy of the folks at Three Rivers Press and Random House.

You must tweet your entry by sunrise Seattle time on April 23, 2011. You can enter as many times as you like, but you can only win once. Prizes can only be sent to US addresses.