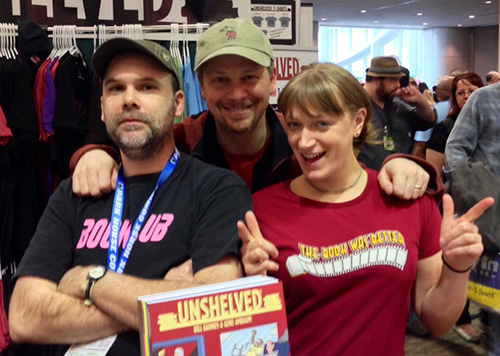 If Gene and I ever made running our cartooning business look easy, that’s because someone else was doing all the hard work.

Back in 2005 our merchandise business was exploding and we couldn’t find quite the right help. My new housemate Jana Kincl agreed to do some shipping on a temporary basis, and by the end of the year we had hired her full time as our Store Manager.

It goes without saying, but won’t, that Jana worked extremely hard. She managed our entire merchandise operation, wrapping up and shipping every order from the Unshelved Store for over a decade, working first from my office, and then my basement, and finally Gene’s garage. At some point she started pressing t-shirts on a hot iron. Jana took everything we threw at her, much of it downright crazy, and made it work. I eventually learned to enjoy the big sigh she made as I explained our latest caper. It meant, “Oh no, what have these idiots cooked up this time?” (Jana also fulfilled both Not Invented Here Kickstarters)

Jana also kept our road show humming, packing hundreds of boxes and bags full of Unshelved books and merchandise and sending them to our talks and conferences. Eventually we started taking her with us, and learned that our shows went a lot better when Jana was in charge of the booth. As many or most of you know, Jana was unfailingly friendly and helpful, and expert at telling you what size t-shirt you wore. It didn’t hurt that Jana, a professional dancer, was stronger than both of us combined, and she could frequently be seen lugging heavy boxes while her two fragile employers opened doors for her.

Finally, Jana was the voice of Unshelved, answering the many emails we got every week.

I think the work was the easy part for Jana. The hard part was putting up with her two bosses, who frequently gave her conflicting orders, quarreled with each other at length, and debated pop culture trivia ad nauseam. At some point she admitted that she visualized putting on “earmuffs” to drown out the constant noise we generated.

When my family decided to leave on a year long trip around the country, Jana took the opportunity to make some changes in her life. She moved out of my house, got a job at a brewery, and taperered her Unshelved schedule from full-time to part-time to call-me-if-you-absolutely-need-me. We moved our online store to Topatoco, and Gene and Ang split the rest of Jana’s workload. But there’s only one Jana.

Thanks, Jana. We literally couldn’t have done this without you.