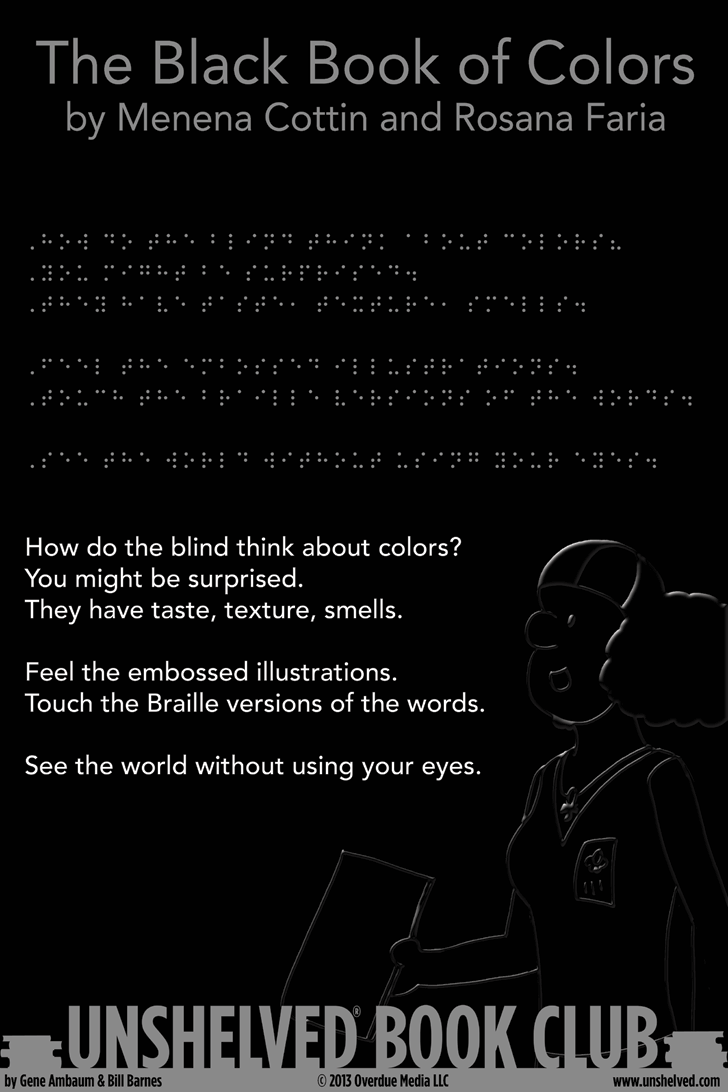 Link to this review by snow tagged picture book

Pinduli's mother has always told her that she is the most beautiful hyena ever, but when she goes out to gather food, the other animals bully her. The wild dogs laugh at her large ears, the lion makes fun of her fur, and the zebra dismisses her stripes. Pinduli tries to cover up her flaws, but her attempts at disguise lead to a hilarious case of mistaken identity which causes all of the animals to rethink their behavior.

Includes information on different types of hyenas as well as details about the other animals featured in the story.

Why I picked it up: Friends and family were telling me I was strange for wanting to get a pet rat. I decided to reread one of my favorite picture books to remind myself that I'm not the only person who finds beauty in animals that are off-beat and seemingly weird.

Why I finished it: Cannon's story is very sweet, but has just enough sassiness to keep it from being saccharine. Children will love how Pinduli gets the better of the bullies who tease her, and adults will appreciate that she does it without causing them harm. The animals learn a lesson with grace and humor, which keeps the story from ending on a preachy note.

Cannon's beautiful art always makes reading one of her picture books a joy. One particular page, where Zebra shows her sorrow at teasing Pinduli and being teased herself, is a masterpiece of layout. The arch of Zebra's neck and her graceful stripes drew my eye down to the single, sad tear dropping to the ground. Other images are funnier, especially the wide-eyed terror of the animals who have come across what they think is an evil spirit.

I'd give it to: Angel, who will enjoy holding my new pet rats (Abby and Ziva!) and who will really like the small, black-and-white drawings below the text that show what Pinduli's mother is doing while her daughter is off having her adventure.

This is the first in a new Larry Gets Lost children's book series where the adorable pup Larry gets lost in various eras of history. In this story, Larry travels back in time for a wild adventure in pre-history, beginning with dinosaurs. Filled with John Skewes' vibrant retro-inspired illustrations and educational fun facts about dinosaurs and the Jurassic era.

For more information on where else Larry has gotten lost and to download a Larry Activity Kit, click here.

Ernest is a large moose. He’s so big he can't even fit in the book. He tries everything he can (in earnest!) to squeeze into the pages, but he is just too big. Ernest has a small chipmunk friend with a big idea that just might make him fit.

Why I picked it up: I have a thing for moose even though they scare me. It's hard to be dumb looking and scary at the same time, but moose pull it off.

Why I finished it: From one page to the next it's entertaining to see which part of him doesn’t fit into the book. It also uses great action words like "squidge," "squodge," and "squeeze" to really show how Ernest is trying to cram himself onto the pages.

I'd give it to: My daughter, Hannah, who will love the creative use of scotch tape and extra paper to help the moose fit into the book. (I’ve come across her paper-and-tape creations many, many times.)

Link to this review by rosie tagged picture book

Jerzy Mae wants to be a ballerina. She always tries to be perfect, but no one can really be perfect so she's always frustrated. Then Jerzy's little brother, Mason, starts attending her classes because their mother has to work late.

Why I finished it: It was fun to meet Jerzy's little brother Mason, who is a natural dancer (which makes Jerzy Mae very unhappy). I don't hear much about boys dancing, and it amazed me.

I'd give it to: My dancing teacher Miss Jeffy Lou. She knows how hard it is to be the only black girl in a dance class, and so she would be happy to see all the black dancers in this book, especially Jerzy Mae's idol, Miss Camilla Freeman, the first black ballerina from the Ballet Company of New York.

Link to this review by sarahhunt tagged biography • picture book

Thomas Edison invented a whole lot of things and improved even more. This is the story of his lab, what he made, and how it changed our lives today, from movies to how we separate ore from rock.

Why I picked it up: Edison was a cool guy, and fairly odd, too. In the illustration of his Menlo Park Lab, you can see the pet bear cub!

Why I finished it: Most books about invention let you think that one smart guy came up with a great idea that immediately got made. This book shows the reality: Edison worked with a whole lot of smart people (many of them in the illustrations) in a company working on hundreds of projects. He and his coworkers invented some things, but more often they made important improvements to existing devices, like the first telegraph that could send and receive messages at the same time.

I'd give it to: Amber, a ‘zine maker who will like that before there were photocopiers, Edison's lab invented an electric pen that worked like a tattoo gun. It punched holes in a sheet of paper to make a stencil that could then be used to make as many copies as you wanted!

When horsefly and honeybee fight over a flower, they each lose a wing. A frog grabs them both, then leaves them on a lily pad to go look for more dinner.

Why I picked it up: The handholding, googly-eyed, one-winged horsefly and honeybee on the cover look super goofy.

Why I finished it: I don’t usually like picture books with a message, but the moment when they escape from the frog by working together had me giggling.

I'd give it to: Claire, who’d laugh at the frog as he tries to get his dinner back. She strikes me as the kind of kid who likes to see amphibians suffer a little frustration.

Fox is tired of eating old, stringy toads every day. After he catches a bunch of tender, young toadlets, their mamma teaches him how to make a special treat.

Why I picked it up: I like picture books with scared looking kids on the front, even if they’re toads. The title implied they were about to be eaten. I was hoping for a story with a sick sense of humor.

Why I finished it: It wasn’t sick. (Spoiler: no toads are harmed in the course of the book.) But I did love the scene were Fox heads to the cookbook store to find new ways to cook a toad. He’s on the floor reading, books scattered everywhere. (I’m sure Fox didn’t buy anything.)

I'd give it to: My sister Traci, who always played with her food when we were growing up. As the mamma toad teaches Fox to make Toad in a Hole, the toadlets play in the butter and honey and start throwing peas at each other.

Someone’s been stealing the cheese from the mouse-infested cellars of a London pub frequented by Charles Dickens. A clever cat is brought in to get rid of the mice, but he has a secret -- he doesn’t eat mice. He loves cheese, and quickly cuts a deal with the mice to pretend to kill them in exchange for morsels from the cellar below.

All goes well until a truly tough cat is brought in, a vicious mouse killer who seems like a villain from one of Dickens’ novels.

Why I picked it up: A third grader asked me for a book by or about Charles Dickens. Given Dickens' sesquicentennial there are many books to choose from, but our elementary school library had none! While I was looking around online, Barry Moser’s cat-and-mouse illustrations caught my eye, and the wordplay on the back cover made me laugh: "He was the best of Toms. He was the worst of Toms."

Why I finished it: There’s a load of literary and historical description in this animal’s-eye-view of the strange goings-on at Ye Olde Cheshire Cheese, a real pub still on London’s Fleet Street that Dickens frequented while writing A Tale of Two Cities. The inn-keeper, cook, and crafty, cheese-stealing kitchen maid give this book the same flavor as Dickens’ stories of working-class characters. The clever complicity of cat and mice reminded me of the the relationship of Wilbur and Charlotte.

I'd give it to: Raeya, who would love Pip, a mouse who can read and write (with his tail dipped in ink) and who uses these skills to help free one of the Tower of London's ravens that is being held hostage.

Link to this review by silver tagged picture book

Living under the bridge between Brooklyn and Staten Island is a dream for all those New York city mice. It’s close to the center of the city but doesn’t have the dangers of life there -- except once a year, during the New York City Marathon.

Preston is the only mouse in the neighborhood who thinks that marathon day is the best day of the year. He wants to be extraordinary, a super rodent, so he decides to run the race. Of course he doesn’t tell anyone. To train he just takes any opportunity to exercise -- when Mama asks if he can scamper out and fetch supper, he runs. When Papa asks him to get more newspaper, he runs.

Why I picked it up: I loved the cover. The front has a photo-like background with Preston, drawn in cartoon style, in the foreground, and the back has Preston looking puzzled at the women who are stretching before the race.

Why I finished it: It’s a very realistic story. I’ve run a marathon (though I prefer half-marathons and triathlons) and understood exactly what Preston was going through.  At about eighteen miles in, when my body started to hurt, I started doubting myself. Why was I doing this? Was this really good for me? Preston’s doubts were even worse than mine, though, because he’d been told that marathons weren't for mice because they have such short legs. So he started thinking that maybe Papa was right, that he wasn’t mean to run.

I'd give it to: Milena, who wakes up at five o’clock every morning to run for a couple of hours before coming to work. She could use this to explain her love of running to her kid(s) (when she finally stops running long enough to have some).