I was lucky enough to meet and interview Zita the Spacegirl writer/artist Ben Hatke at this year's annual American Library Association conference. He's not only a talented artist, he's also a gymnast (just take a look at Ben warming up for our interview), musician, fire breather, and juggler. He is, as my friend Gina described him, lovely.

The microphones weren't working, so we gathered the audience around us in front of the stage and had a great conversation with Ben. He talked about studying art in Italy, raising daughters (including one named Zita), how he works, and a lot more. Listen to the interview here. 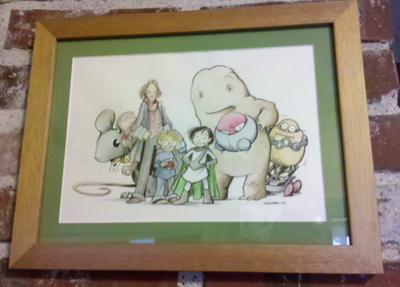 PS: I was lucky enough to have a chance to buy this art from Ben at the show. If you're ever in the same place he is, go by his table. His art is excellent, and, if you're lucky, he may even have some comics his daughter made.