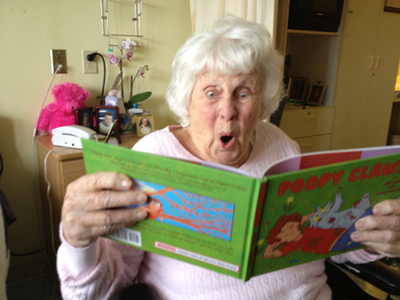 The only thing better than having a few copies of my new book Poopy Claws in-hand is watching my grandmother (to whom I dedicated it) laugh at all the right (gross) places. She even vamped for the camera a bit. :)

I will have a few copies at the Emerald City Comic Con in Seattle this weekend, and at both C2E2 and the Texas Library Association Conference in the next few weeks.

But, frankly, I'd love it if you would order the book now. There's both the standard edition (which ships the third week of April) and a limited edition that includes a sketch by the artist, the über-talented Sophie Goldstein. (The artist's edition ships a little later than the standard.)

As an incentive to order before our first shipping date, everyone who does gets a DRM-free PDF for his/her personal electronic devices. (I'll be emailing a link shortly after the book ships.)

And I'm going to throw in these three bookmarks with preorders, too.