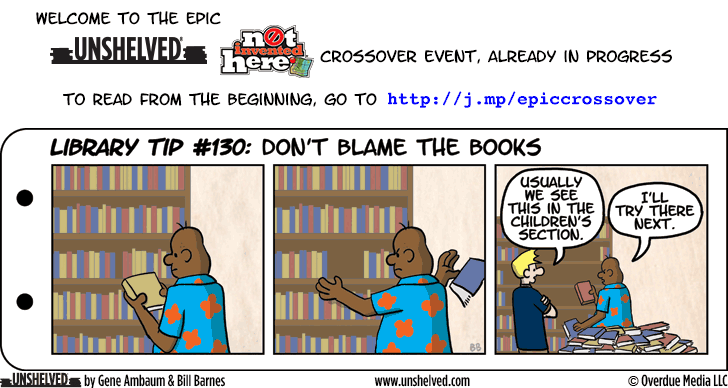 As most of you probably know, I have two comic strips. I draw and co-write Unshelved with Gene Ambaum, and I write Not Invented Here, which is drawn by Jeff Zugale. Although we don't talk about it much, the two strips take place in the same universe. In fact NIH launched almost five years ago as a spinoff from Unshelved, drawn by NIH's original artist.

We decided to bring the two strips together again. Here's how it works:

You actually don't have to know any of this. Gene and I carefully wrote the Unshelved strips so that they stand alone, independent of the ongoing NIH plotline. But if you are up to date on NIH, you will have more depth of understanding. (The same is mostly true in reverse - NIH fans don't have to read the next two weeks of Unshelved, but it will help a lot of they do.)