Amazon | Powell's
Extraordinary People: A Semi-Comprehensive Guide to Some of the World's Most Fascinating Individuals by Michael Hearst, Aaron Scamihorn
Chronicle Books, 2015. 9781452127095. 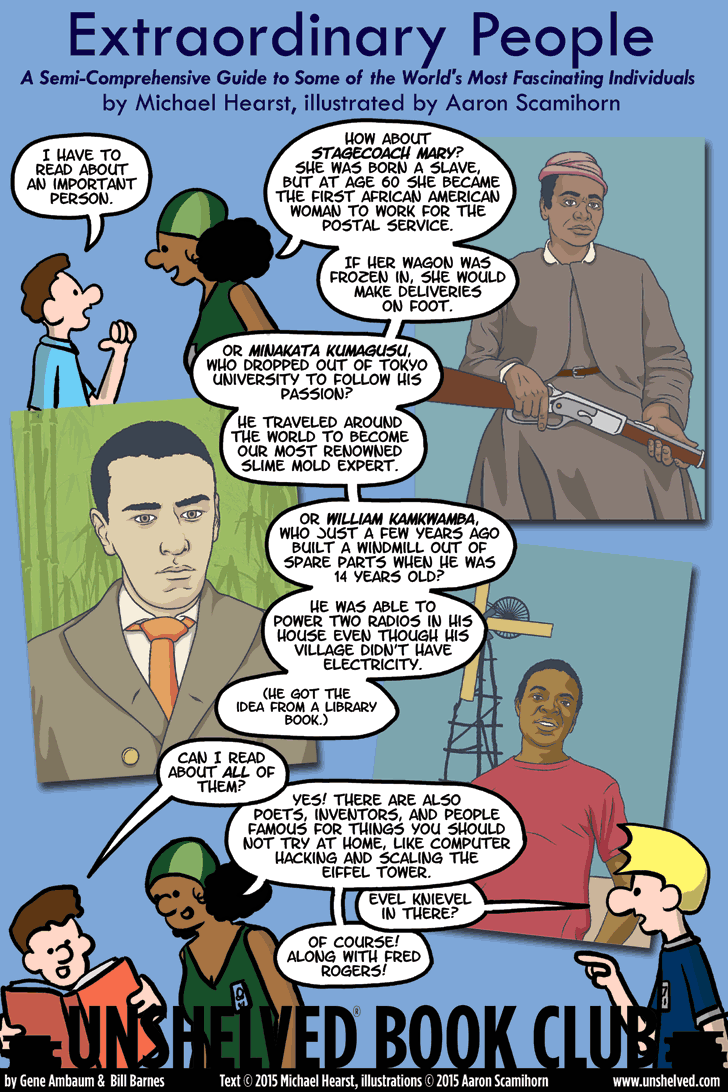 Link to this review by murphy'smom

For the past few years, while her daughters have attended the prestigious, elite St. Ambrose Academy, Beatrice has ruled over the students' mothers' volunteer committees. She is the quintessential queen bee if ever there was one. Rachel, Beatrice's former BFF, is now being snubbed by Bea and others because her husband left her. She watches the mothers compete for Beatrice's attention from the sidelines, and discovers the very thin line between being an amused observer and a miserable outcast. The mothers form into cliques, siding either with superficial Bea or sympathizing with Rachel.

Why I picked it up: This was mailed to me by a Real Simple magazine editor. I opened it because I enjoy discovering new authors and especially getting to read an author's first work.

Why I finished it: I laughed out loud when I realized the pun in the title and Bea’s name. And I loved the over the top characters and their self-important roles -- they are exaggerated caricatures of meanness and self-loathing. But I also felt sympathy for Rachel because I have been the outsider in high school and as an adult. I was glad to see her realize that only her opinion of herself matters. And I was hoping to see the queen bee dethroned.

It’s perfect for: Amy, who was one of the meanest girls in my high school. Her family was rich, and adults were completely snowed by her apparent sweetness and charming behavior. She got away with murder at school even though she vandalized property and trash talked everyone. I would love for her to understand how her bullying affected others and the damage she caused.

Link to this review by flemtastic tagged historical fiction

In 1902, August Engelhardt, a hard-headed, nudist vegetarian, moved to Kabakon, a private island in what is now Papua New Guinea. He started a commune of sun-worshippers working a coconut plantation where everyone lived simply and clothing-free. His writings (and probably the remote, exotic location) provided enough allure to tempt counter-culture European youngsters to give his lifestyle a try. Engelhardt was an ideologue, who, despite his plans for a commune was the sole decision-maker on the island. He followed his Cocovore theory, that because coconuts grew at the tops of tall trees, closest to God, they were the only food and drink necessary for sustenance. This diet led to his death in 1919 when, malnourished and alone on the beach of his island, he had been abandoned by his native workers and his disciples.

Kracht fictionalizes Engelhardt’s story to explore why people are drawn to this type of utopian vision.

Why I picked it up: A good friend who knows my taste for both NPR and books sent me to this review of Imperium.

Why I finished it: I wanted to know what would motivate people (especially a large group from Germany) to move thousands of miles to a private island to follow a sun-worshipping Cocovore. (It was quite an undertaking in that time period to travel so far.) Engelhardt was a gifted writer, and his tracts and books about radical vegetarianism and his utopian society in the South Seas were persuasive. It is clear that he tapped into the Zeitgeist of Europe at the time, when many felt the need to leave growing industrialization and war-mongering behind to return to simpler ways.

It’s perfect for: Stan, because this story employs Engelhardt as an unreliable narrator, which provides a not-so-secret thrill to retired English teachers like Stan.

In the tiny nation of Koyanagar, boys outnumber girls five to one, and men have no power and no wealth unless they marry into it. Sudasa’s rich family forces her to participate in a contest to choose her future husband from among five boys. The losers will be sent to guard the Wall which surrounds the country. The winner will be little more than her slave. Her grandmother has rigged the contest so that her second cousin will be the winner, but Sudasa is more interested in number five, who seems to want to lose.

Why I picked it up: I'm a little bored with teen dystopias now, but this fictional nation that was once part of India intrigued me.

Why I finished it: Sudasa's struggle for independence is thwarted by her grandmother at nearly every turn. She and Five, through the barest lines of communication, come to an understanding of his desire to be free, and that sets her on her own path toward freedom as well.

It’s perfect for: Lily, who has a growing awareness of equity issues. She would really like seeing how Sudasa and Five communicate, mostly through facial expressions and their eyes, though they are not allowed to speak for more than a moment while she is awarding the prize after each phase of the contest.

Link to this review by geneambaum tagged board book

Two adventures starring the bean-shaped Hueys. In one, the Hueys all look the same until one, Rupert, knits himself a sweater. In the other, a Huey explains the concept of none in a counting book.

Why I picked it up: It’s my birthday, and I seem to be in a board-book mood. (Maybe I’m regressing farther than usual.)

Why I finished it: I didn’t expect to laugh at both of these, but Jeffers got me. I giggled at the six fishermen waiting for the bus and the seven oranges balanced on things. And as the Hueys started to embrace being different (by knitting their own sweaters, which are all the same), it was the perfect setup for The New Sweater’s last page.

Readalikes: My two favorite graphic novels starring bean-shaped characters. Trondheim’s wordless Mister O is about a little dude trying to get from one cliff to another across a chasm. (It’s not just amazing cartooning, it’s also a brilliant deconstruction of old Roadrunner cartoons.) And Larry Marder’s Beanworld Book 1: Wahoolazuma! introduces the Beans, trying to survive their place in their ecosystem and make their way in their world.

Charlie Price has died suddenly in the crash of his small plane. His girlfriend, Aubrey, is heartbroken. Although she had never met his family, she goes to his memorial service where she is surprised to hear another young woman identify herself as Charlie’s girlfriend. After the service, Aubrey and Lena compare notes and come to the conclusion that Charlie was not only cheating on them, but was likely hiding much more.

Why I picked it up: The exploding rose on the cover and the tag line “curiosity is a killer...” was intriguing to me, and the blurb at the top promised it was “twisty & devious.”

Why I finished it: What begins as the story of two young women seeking answers and revenge on a cheating, lying boyfriend ends up taking the girls from Paris to Mumbai to Bangkok in search of the truth. In every city they learn something new and frightening, and discover that Charlie isn’t the only one with secrets -- Aubrey and Lena have been lying to each other as well. The action is swift and surprising, and I couldn’t put it down.

It’s perfect for: My friend, Dee, who likes stories with female lead characters and unpredictable plots. She’ll love the mystery of what really happened to Charlie, and she’ll especially love the ending that solves the mystery yet leaves much to the imagination about the future of Aubrey and Lena.

Grouped into subjects like Tongues, Tri-Pawds, Sharp Dressers, and Beautiful Blends, this collection of photographs celebrates the personalities of all kinds of irresistible dogs. Based out of New York City, Friedman’s dogs range from puppies to seniors, some with eyes closed or mid-howl, others with floppy ears or with a best friend, all while catching a ball, taking a walk, and even just hanging out wearing a bow tie.

Why I picked it up: It was a Christmas gift from my mom, who knows how much I adore pet photography.

Why I finished it: Six-month-old Noodle’s nose, Bob Marley’s grey muzzle and eyebrows, Spitfire’s infectious smile, and the head-tilting Chelsea in her bright red raincoat. There are even some non-canine companions, like Queelin (a four-year-old pot-bellied pig), Gary the squirrel, and Lady Gaga the pink hen.

Readalikes: Underwater Dogs by Seth Casteel because who can resist dog photos? Humans of New York by Brandon Stanton since so many of its subjects were also found on the streets of NYC. And Felines of New York by Jim Tews because cats are cute, too.