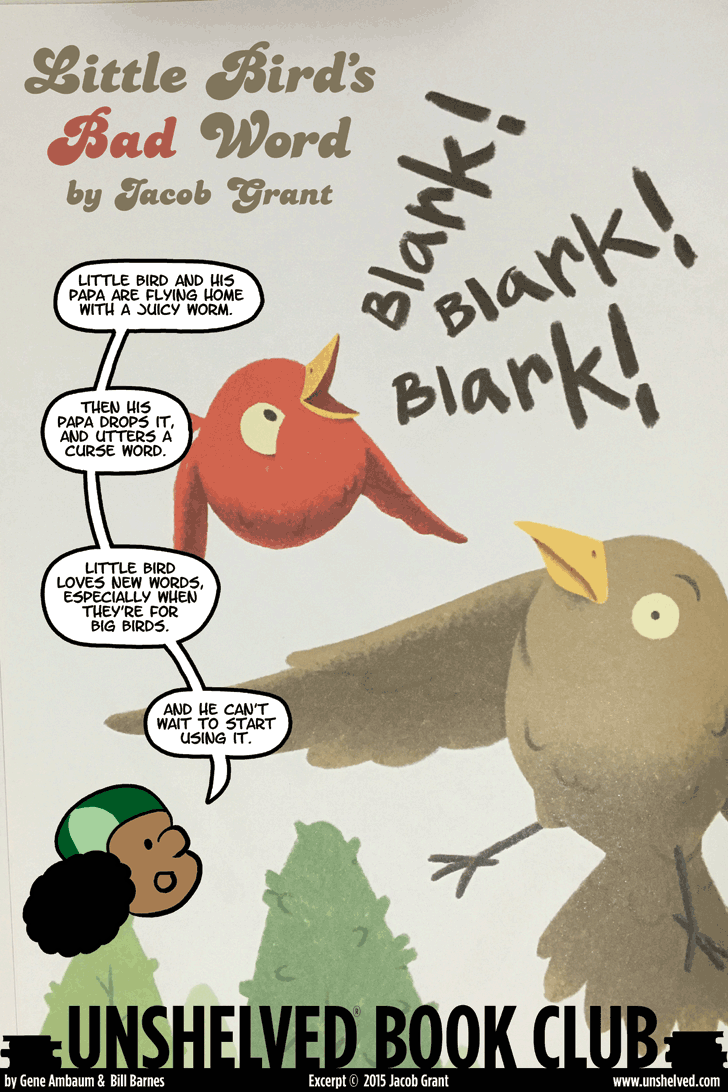 Link to this review by robert tagged picture book

Crankenstein seems like a normal elementary school boy. He’s not a morning person, and things start to go downhill when his smiling mother wakes him up with special Valentine’s Day underwear in hand. But being forced to wear heart-decorated briefs isn't the low point of the day. At school he is dragooned into crafting pink and red decorations, fed heart-shaped snacks, and conscripted into portraying Cupid in a school play. Things start looking up when he meets a girl who detests it all as much as he does.

Why I picked it up: I work at a florist, and every so often I check and see if the library has new books on Valentine’s Day and Mother's Day, our busiest delivery dates. When I saw the illustration of a peeved, neck-bolt-wearing boy surrounded by hearts on the cover, I just had to check it out.

Why I finished it: There's plenty of details in the pictures. The decoration making and mounting pages could be a blueprint for Valentine’s Day crafts, right down to paper flower construction. Anyone who's ever been drafted into labor-intensive paper chain making when they'd rather be studying, particularly when they aren’t in a festive mood, will sympathize with Crankenstein.

It’s perfect for: My mother, who is a volunteer in the children's section of her local library. The mildly subversive protest against celebratory conformity by the grumbling, growling, muttering Crankenstein would appeal to many kids. The message that a child’s feelings are valid and can change should be applauded by parents.

Readalikes: The Anti-Valentine's Handbook by J. More. This is organized disdain against the dating imperative for high school-aged readers. It's a compilation of rejection nightmares, bad date movie lists, and worst dates ever (“Taxidermy exhibition at the natural history museum” clearly deserves second place) that fulfills its mandate to cast scorn on forced romance.

It is not easy being a crayon that belongs to a child. If you are a favorite, you get overused. If you are a weird color, you get forgotten, neglected, or left behind. But at the end of the day, you want to be a part of the magic of creation, and you want to end up back in that big box with your siblings. The Day the Crayons Came Home is a series of postcards to the neglectful Duncan from scattered, missing, and abused crayons that just want to come home.

Why I picked it up: I really enjoyed The Day the Crayons Quit which introduced Duncan and his crayons. What really snagged me into reading this sequel was the postcard on the cover (I love getting mail).

Why I finished it: Poor Pea Green was doomed to draw only the dreaded vegetable (and only the pale, sad, canned version). I loved that he renamed himself “Esteban the Magnificent” and sought adventure. There are tons of modified vintage postcards and drawings and, best of all, a glow-in-the-dark spread that had me and my co-workers hiding out in the supply closet.

It’s perfect for: My best pen pal Sarah, who will be jealous that the crayons can somehow say so much in the space of a single postcard. They must be writing with their tiny hands or legs, because there is no way you can get a real crayon that sharp. She will love sharing this book with her two kids, who will enjoy spying the naughty and crude kid humor that sneaks in, such as when brown crayon runs away because of his deep embarrassment at being used to draw bear poop.

Link to this review by sarahhunt tagged nonfiction • picture book

Get to know the founding fathers through short biographical sketches, pen and watercolor portraits with funny details, and important facts like their nicknames, the languages they spoke, the jobs they held, and their opinions on France.

Why I picked it up: The founding father kickline on the cover.

Why I finished it: The illustrations and portraits set the tone for the book: accurate, informative, and not at all serious. It includes founding fathers I'd heard a lot about (George Washington, Benjamin Franklin) and others I'd never read about before (John Jay, Gouverneur Morris). The fact sheets list their takes on major controversies during the creation of the Constitution and Bill of Rights, like whether to have strong states or a strong central government, the role of religion in government, and the issue of slavery. (Turns out that a lot of people who were opposed to slavery still owned slaves.) There was a lot of fighting and strong feelings that boiled over. It's easy to forget that the way things turned out for the U.S. wasn't inevitable or even obvious at the time.

It’s perfect for: The school events where students dress up as a historical character. Basics like height and weight are listed, but I especially want to see a kid dressed as James Madison who adds Madison’s pet parrot to the costume!

Cinderella dreams of repairing rocket ships while she's stuck at home fixing the robot dishwasher. She finally gets her chance when she repairs a ship with tools provided by her fairy god robot so that she can go to the prince's royal space parade.

Why I picked it up: I liked the look of this practical, pink-haired Cinderella. Her outfit looked both cool and exotic.

Why I finished it: Cinderella's technical skills get her a job as royal mechanic instead of the prince’s hand in marriage. This seems like a good goal.

Link to this review by diane tagged picture book

Henry Hyena is feeling blue. All his hyena friends in the zoo are having a great time, but Henry won’t laugh or even play. He finally visits Dr. Long, a wise old giraffe, to figure out what’s wrong.

Why I picked it up: I’m always looking for books to read to my two-year-old grandson.

Why I finished it: The sing-song rhyming text makes this an easy and entertaining read-aloud, and the bright, cartoon-like digital illustrations are eye catching.

It’s perfect for: My friend, Kathy, who has a five-year-old granddaughter. At two years old, my grandson may be a bit young for this one since he wouldn’t understand the anti-teasing message, but Maddy will love the poetry and is old enough to get the message that “being nice [is] the best way to play.”

Link to this review by wally tagged biography • picture book

French artist Henri Matisse was inspired by his mother, who decorated their home with colorfully painted plates and vibrant rugs, and taught him how to mix colors and see the iridescence of birds.

Why I picked it up: Henri Matisse is one of my favorite painters, and this children's picture book looked like a great way to introduce him to young readers.

Why I finished it: The story is really just two long sentences stretching across many pages. They show Matisse’s childhood in a boring, gray French town where the only color was provided by his mother, who brought art and textiles into their home. How could he not become a famous painter? Hadley Hooper's simple, colorful illustrations pull the story along and even mimic Matisse's style.

It’s perfect for: Rose, who is raising her children to be art lovers if not artists. She'd like the informative afterword by the author and the artist, which talks about Matisse's mother's influence on her son’s development and how she brought him a paint set when he was laid up in the hospital with a childhood illness.

Link to this review by geneambaum tagged nonfiction • picture book

Two ravens search for their next meal in a snowy landscape. They follow the sounds of wolves hunting. When that doesn’t work out, they lead the wolves to an injured deer so that they can all eat.

Why I picked it up: The marketing copy said it was “a survival story of symbiosis between ravens and wolves.” Ravens and wolves helping each other? I wanted to know more.

Why I finished it: Dawson’s illustrations are amazing. It looks like she painted on raw, brown illustration board, and she uses its textured brown as the color of trees and to show where snow has been brushed away to reveal the ground. And her birds and animals are drawn with elegant curves that show their power and speed when flying and giving chase.

Readalikes: In some ways this book made me think of Gon, about a mischievous little dinosaur trying to survive in a beautifully rendered and brutal prehistoric world.

Master takes his student ninjas to a farm for the day. But every time he tries to get them to help with farm chores, there’s a disaster.

Why I picked it up: On the cover, the worried martial arts master in the pig trough made me laugh.

Why I finished it: Every bit of Tougas’s art is pleasantly textured, from the ninjas (which look like they were cut out of paper in many scenes) to the pig’s slop to the barn walls. But mostly it was the laughs that kept me reading, from the Master clinging to a high branch to escape an angry bull to the worried-looking little ninja milking the cow.

It’s perfect for: The smaller kids at the judo dojo where I go with my daughter. Like these little ninjas, they often lose focus and get into trouble but they always work together in the end.