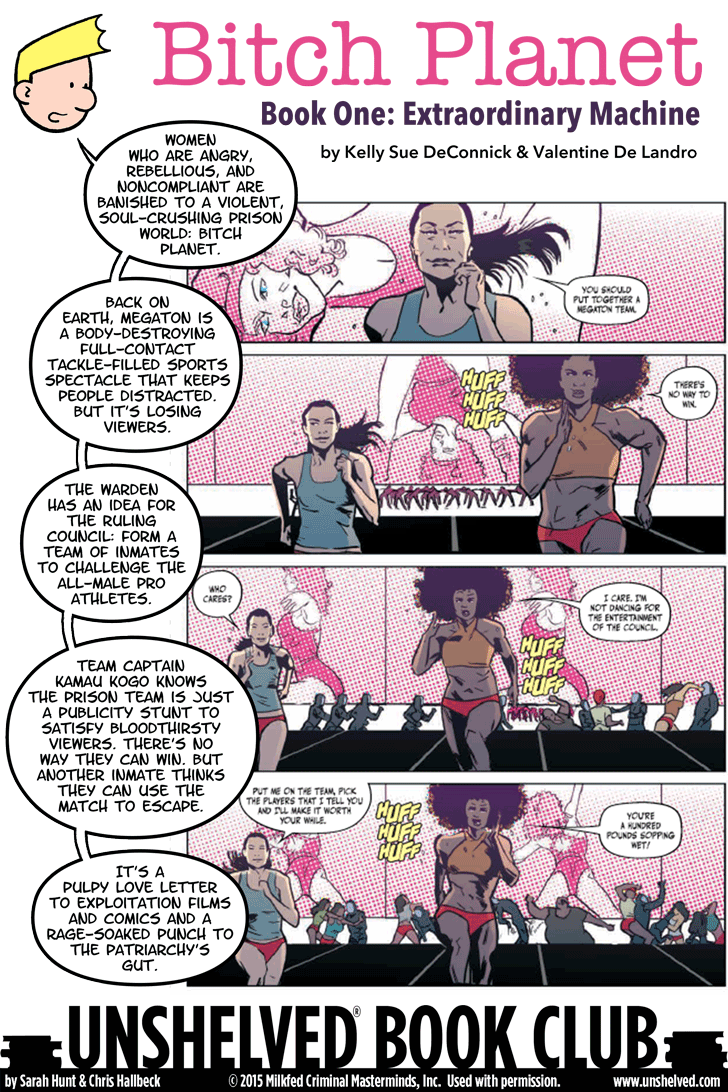 Dr. Iwan James is deeply unhappy. He’d rather be riding his bike than spending time with his family, and he has a romantic fixation on one of the doctors he works with. (The other, the senior partner at their practice, drives him crazy because he never works.) Dr. James frequently visualizes blowing his own brains out, and has to chant F-bombs to reduce his stress. He can’t tell if he’s a good person, a good doctor, or neither.

Why I picked it up: My wife and I talk about medical issues a lot (she’s a PT and my grandmother was a nurse). And our friend, Ellery, makes comics and has been attending Graphic Medicine conferences for years. It seems many medical practitioners are trying to figure out how to use comics, and I only have a peripheral exposure to their work.

Why I finished it: My favorite parts were the office visits with patients. Some are funny, like the 103-year-old man who is losing his sight and starting to hallucinate (though he knows the visions aren’t real). When asked what he attributes his longevity to, he answers, “I’ve never touched a woman and I’ve never eaten the flesh of the pig.” (Dr. James is speechless.) There’s also a man who had open heart surgery but whose tattoo wasn’t stitched up straight, and another whose false teeth pop out of his mouth during an exam. They’re not all funny, though -- there’s a woman upset that she wasn’t told she had borderline personality disorder, as well as a grieving widower and others that made the book feel real.

Readalikes: [Minor spoiler ahead] Williams's writing is brilliant, and Dr. James’s behavior, along with the bits of his backstory, made me realize he had OCD, the source of his obsessions and his unhappiness. As he tries to help a patient who also has OCD, the question became whether or not he would take his own advice and seek help. This was a real window into the different ways OCD can manifest and affect people. Another graphic novel that gave me insight into mental health issues was Ellen Forney’s autobiographical Marbles, about her mania, depression, and struggle to make art through both.

Link to this review by darcy tagged graphic novel

A collection of comics lets readers experience a year in the life a dog named Plum, a Whippet mixed with Jack Russell Terrier and poodle. She lives in London where she makes new friends, sniffs out new places, and shows the world through the eyes of a dog.

Why I picked it up: Gene knows that I love dogs, so he's always recommending dog books to me. The watercolor illustrations in this graphic novel and Little Golden Book-like design were right up my alley, and I couldn't wait to crack it open.

Why I finished it: It starts out on New Year's when Plum makes a list of resolutions: be braver, catch a cat and a fox, don’t unstuff her toys immediately, and sleep in her people's bed every night. I'm a sucker for an epistolary story, so the year-long format was a draw.

And then there were life’s trials, tribulations, and pleasures experienced through a dog's eyes: vacations to the sea, being left home alone, illness and injury, the death of loved ones both human and canine, and the pure joy of rolling in fox poo. I hadn't heard of this comic before reading the book, but now it's a blog I've started to visit on a regular basis. The topics are always relevant and I especially love this recent one about personal space.

It’s perfect for: Fans of Stan, the dog on the show Dog with a Blog. My kids crack up every time they see Stan typing, and they are drawn to the adventures of Stan and the family he lives with. Stan has an ongoing relationship with the poodle next door, has nearly been kidnapped, and keeps the secrets of the kids in the family. Plum has similar adventures with her person -- she rides on a train and regularly meets many other dog friends -- but, like Stan, she's devoted to her human family.

Link to this review by sarahhunt tagged anthology • graphic novel

Why I picked it up: By the third or fourth great piece from The Nib that I saw in my Twitter feed, I wondered how one website could have so much great stuff. I wanted to read everything.

Why I finished it: I imagine this is what The New Yorker would look like if every piece was in comic form: thought-provoking, edifying, moving, and just silly.

The victim may be Stanford White, a genius architect who was gunned down on the roof of his most famous creation, Madison Square Garden, but Geary's sympathy lies with neither White nor the gunman, millionaire Harry K. Thaw. Instead it is with Evelyn Nesbit, a former teen model and chorus girl White targeted for seduction, and from whom he refused to take “no” for an answer, and whom Thaw later married.

As is typical in his historical, murderous graphic novels, Geary starts with a dramatic crime then delineates the era in terms of societal concerns and important personages (which in this one includes some bad behavior by First Daughter Alice Roosevelt). He moves on to the backgrounds and interactions of the leading personages in the case, returns to the crime, and then moves on to the trial through the eyes of the journalists covering it. In the end, Thaw was tried three times for the murder (the first jury couldn't reach a decision, the second found him insane, and the third acquitted him).

Why I picked it up: Author and illustrator Geary was a stalwart member of the San Diego illustration scene for a long time. Even though he's moved to New Mexico, I still keep tabs on what he's publishing. I deeply enjoy his true crime graphic novels.

Why I finished it: Geary's an expert at capturing the look of the times he writes about with his black and white line art. His depictions of the main characters are stunning, from the creepy, victim-grooming techniques of sexual predator Stanford White to the increasingly unhinged behavior of eccentric and wealthy shooter Harry K. Thaw.

It’s perfect for: My nieces and their friends, who have been raised believing musical and dramatic performers are respected ambassadors and transmitters of culture. Madison Square Tragedy has its roots in a not-too-long-ago era where those same performers were considered sexually available and vulnerable, if not out-and-out prostitutes and gold-diggers.

Readalikes: Sadly, none of us will be able to see and touch Stanford White’s Moorish-influenced Madison Square Garden as it was demolished in 1925. For a very recent history of the four buildings that were and are Madison Square Garden, read Madison Square Garden: The History of New York City's Most Famous Arena. Harry K. Thaw was a member of the New York Society for the Suppression of Vice, run by the censor Anthony Comstock, who openly bragged about how many of those he persecuted committed suicide. Heywood Broun and two-time Pulitzer winner Margaret Leech's expose Anthony Comstock: Roundsman of the Lord hasn't been reprinted much (if at all) since 1928, but if you can find it, it'll give you an idea of the vice-obsessed milieu into which Thaw insinuated himself.

Link to this review by wally tagged graphic novel • paranormal

Why I picked it up: I've reviewed a few other Mizuki books (Showa 1926-1939, NonNonBa, Onward Towards Our Noble Deaths), and each one is different.

Why I finished it: The stories range from simple good-vs-evil tales to epic battles where the fate of humanity is at stake. In "Cruise to Hell," two criminals on the run come to Kitaro's house while he is away and discover a jewel that shows two loathsome creatures climbing a precipice in Hell. What they don't know yet is that they will become those creatures by the end of the story. I loved the humor as well, like in "Monster Night Game" in which a group of boys finds Kitaro's magic baseball bat. If they want to keep it, they must defeat Kitaro and his monstrous friends with all of their powers. (The boys get to keep their lives if not the bat.)

It’s perfect for: Zoe, who is a fan of Godzilla movies. She will love "Creature from the Deep,” about a young scientist who grabs the glory when the team he is on (along with Kitaro, who knows about these monsters) locates a zeuglodon, an immortal ancestor of whales. The scientist, Yamada, steals the blood sample and then injects a bit of it into Kitaro hoping to kill him. When Kitaro becomes a zeuglodon himself, he tries to tell everyone that Yamada is up to no good, but they think he is attacking Tokyo.