Everyone who sees Jimmy knows him as “Disco Jimmy” because his friend, Jake, posted a video of Jimmy dancing on YouTube. It’s had over a million hits in two weeks. Jimmy is humiliated.

He really wants to get to know Jolene, who goes to his high school, but he can hardly talk when he’s near her. He signs up for a drawing class he knows she’s going to take.

Then his Uncle Pierre makes a video of a bigfoot in the woods near his cabin. He pressures Jimmy into posting it online. Pierre becomes famous, though reactions to him and his video are mixed.

Why I picked it up: I liked the drawing on the cover. The lines have equal weight, as if they were done with a technical pen instead of a brush or nib, and the colors don’t have any gradient. It’s deceptively simple looking but a great picture.

Why I finished it: I’m a big fan of graphic novels and comics where the artist uses the same layout on every page, like this one. The panels are all equally sized, and they’re arranged in a three by four grid on every page. A book like this is like an excellent fixed verse poem, where you realize how good the poet is because of the limitations the form imposes.

I'd give it to: Vicki, who dances as goofily as Jimmy (and with as much abandon) -- I’d be able to convince her to read it by showing her the endpapers which feature Jimmy busting moves.

Fans of Jacqueline Winspear will be totally enamored of this series featuring Dandy Gilver, a witty, wealthy, and totally original aristocrat who puts her status to good use by solving crimes. When Dandy gets a letter from a woman who thinks her husband is going to kill her, she must go undercover as a maid to get the complete story. Perfect for fans of Julian Fellowes and Gosford Park, this series brings readers a sleuth they will find irresistible.

Link to this review by gigi tagged picture book

Chamelia is a chameleon. Instead of blending in she likes to stand out. She does most things the opposite of other chameleons.  Sometimes her crazy outfits make it hard for Chamelia to do things with other kids.

Why I picked it up: The jumping chameleon on the cover.

Why I finished it: I wanted to see all of Chamelia’s different outfits. My favorite is when she’s in the school play.  She’s supposed to be Goldilocks, but she looks like Cleopatra.

I'd give it to: Maya, my friend Max’s little sister who dresses in a fur vest and gold sparkly pants.

A collection of insanely funny texts between parents and kids, When Parents Text affords a surprisingly affecting window into the complicated time when parents aren’t ready to let go, and kids aren’t ready to be let go. The parents are well-meaning but befuddled by the technology. The kids are bewildered yet patient.

“This is an addictive and side-splitting read... the underlying relationship between parent and teen is simultaneously touching and hysterical. This should be a best seller-it is a total moment-in-time classic. Enthusiastically recommended.” Library Journal.com Starred review

Pornographic, wordless, black and white graphic novel about a woman’s sexual relationship with a mechanical, humanoid robot that her lover makes for her.

Lots of robot sex, in case that wasn’t clear enough.

Why I picked it up: The first page of my review copy was startlingly explicit.

Why I finished it: The perspective and foreshortening used throughout wowed me, along with the content.

I did stop reading it when my mother-in-law was standing in the kitchen (where I work), for fear that if she looked over my shoulder she’d have a heart attack.

I'd give it to: Tim, who once told me the great thing about Phil Foglio’s X-rated XXXenophile (NSFW, obviously) comics was how much fun everyone was having, because in Chester 5000 everyone looks pretty happy, too.

This immersive, Nancy-Pearl-approved debut from Rebecca Rasmussen unfolds in small-town Wisconsin, where there’s one place everyone knows to go when a bird flies into a window. They go to Milly and Twiss, two spinster sisters—one who mends the birds back to health, and one who “fixes” the people who bring them in.

But that’s now. That’s after the tumultuous summer of 1947, when just about everything they knew would change, and when their cousin Bett came down from a town called Deadwater.

Why I picked it up: I really enjoyed the anthology First Time, which was also from NBM’s Eurotica line of artsy graphic novels about sex. Also, I am a sucker for folktales.

Why I finished it: The gorgeous art. Chaiko’s softly colored maid-and-master story opens and closes the anthology, wrapping the collection up nicely. The rest of the tales are more vibrantly hued, making the folktales seem more realistic than the comparably modern story of the girl reading them.

I'd give it to: Don, in thanks for letting me steal his copies of Heavy Metal magazine (warning: NSFW) all those years ago. This collection is much tamer than Heavy Metal’s horror and science fiction heavy fare, but the sensual tales will appeal to his love of beautiful women in art.

New in paperback, this charmer stars Balthazar Jones, who has lived and worked in the Tower of London for the past eight years. Being a Beefeater is no easy job, and when Balthazar is tasked with setting up an elaborate menagerie of the many exotic animals gifted to the Queen, life at the Tower gets much more interesting. Penguins and giraffes escape, and the Komodo dragon sends innocent tourists running for their lives. Still, that chaos is nothing compared to what happens when his wife, Hebe, makes a surprise announcement. What’s a Beefeater to do?

Link to this review by sarahhunt tagged coming of age • superhero

Scott has been a student at an exclusive prep school by day and super sidekick Bright Boy by night since he was adopted at eight years old. But now he's a teen. (Bright yellow tights are not the best clothing choice as he’s prone to the occasional spontaneous boner.) After years of not having anyone who can understand his life, he finds a friend. Unfortunately, it's the sidekick of his partner's arch-enemy, Dr. Chaos.

Why I picked it up: I like superhero novels that explore the life behind the mask.

Why I finished it: Awesome fight scenes sucked me in, and the threat of danger for everyone Scott had a relationship with kept me turning the pages. Superhero life isn't just dangerous because of the rooftop battles, it's dangerous because anyone you love can be a target.

I'd give it to: Giles-fan Riley for Louis, Scott's trainer/driver/bodyguard/chef. Louis battles him every morning in their gym, and in that way looks out for Scott by making sure he's tough enough to face his foes. Every time he defeats Scott (all the time), he makes Scott admit that Louis makes the best pancakes in the world (he does). 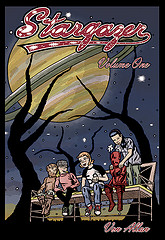 After her grandmother dies, Marni inherits one of her favorite things, a mysterious object her grandmother had since she was a child. Marni is grieving, but she and her friends Sophie and Elora decide to go ahead with a campout in Marni’s backyard. In the tent, the object suddenly gives off a bright light. When they emerge from their tent they discover they’re now alone on an alien world with two ringed planets in the sky.

Why I picked it up: I hoped it would be like Mark Crilley’s Akiko.

Why I finished it: They find a strange building, and inside is a table filled with alien fruit. Sophie dives right in and starts eating everything, to the horror of her friends. (When I travel, I usually eat the weirdest or most (at first glance) repulsive local food I can find, and I’m a big fan of Andrew Zimmern’s Bizarre Foods. I’ve learned the hard way that duck tongues and Chinese liquor shouldn’t mix.)

I'd give it to: Collette, who co-wrote a graphic novel about sushi with my daughter in the second grade last year. This book has such an innocent, non-threatening tone she’d be able to share it with her younger brother and sister, too.

Link to this review by flemtastic tagged coming of age

Stick and his older brother, Bosten, have a tight relationship in part because of their father’s domineering attitude. If they don’t follow his myriad rules that govern every aspect of their lives, they earn a beating and time in St. Fillian’s room (a bare room where they are locked for however long is required by their transgression). Bosten is clashing more and more with their father. A visit to California to meet their aunt inspires Bosten to run away and sends Stick on a perilous road-trip to find his brother and a new life.

Why I picked it up: I got to talk to Andrew Smith in Chicago for an hour at a publisher’s dinner. He was interesting, plus his works are always disturbing on a grand scale (the homicidal Mitch in In The Path of Falling Objects and the bloodiest book I have read in years, The Marbury Lens).

Why I finished it: Living with his aunt, Stick finds that not all families have rules and punishments like his. He hides a souvenir of his trip to Califiornia, a Dr. Zog’s Sex Wax T-shirt, deep in his dresser, taking it out and smelling it every now and then.

Stick and Bosten have a genuine brother relationship. It’s cemented in details like Stick clipping and saving a newspaper article about a firework his brother lit off -- it was mistaken for a UFO, and he knows Bosten will get a kick out of the coverage.

I'd give it to: Jim, a high school counselor who would not necessarily be deterred by the fact the book uses the word “boner” about 500 times.

Link to this review by sharonlevin tagged nonfiction • science

Stewart’s earlier (and highly recommended) book was Wicked Plants, a fascinating treatise on well- and little known plants with interesting characteristics. This time Stewart explores the world of bugs (I can’t say insects, since she includes slugs, spiders, etc.). She conveys information in a humorous and memorable way, making this a laugh-inducing and horrifying read. Did you know that banana slugs (a creature both my girls have kissed as part of outdoor education) are hermaphroditic -- they mate male to female and female to male parts with another slug at the same time?  But sometimes a piece of the male anatomy gets stuck and the other slug has to chew it off, leaving its partner a female from there on out. (Trivia note: this removal of the appendage is called apophallation).

Why I picked it up: I heard Amy Stewart interviewed on the radio and wanted to hear more memorable and disgusting stories about the insect world.

Why I finished it: So I’d have more crawly facts to gross out my teens at the dinner table.

I'd give it to: Spencer, who is so afraid of spiders that even pictures freak him out. This would either desensitize him completely or make him unable to ever leave the house again. (He’ll probably cower in the shower when he realizes that wicked bugs are EVERYWHERE.)