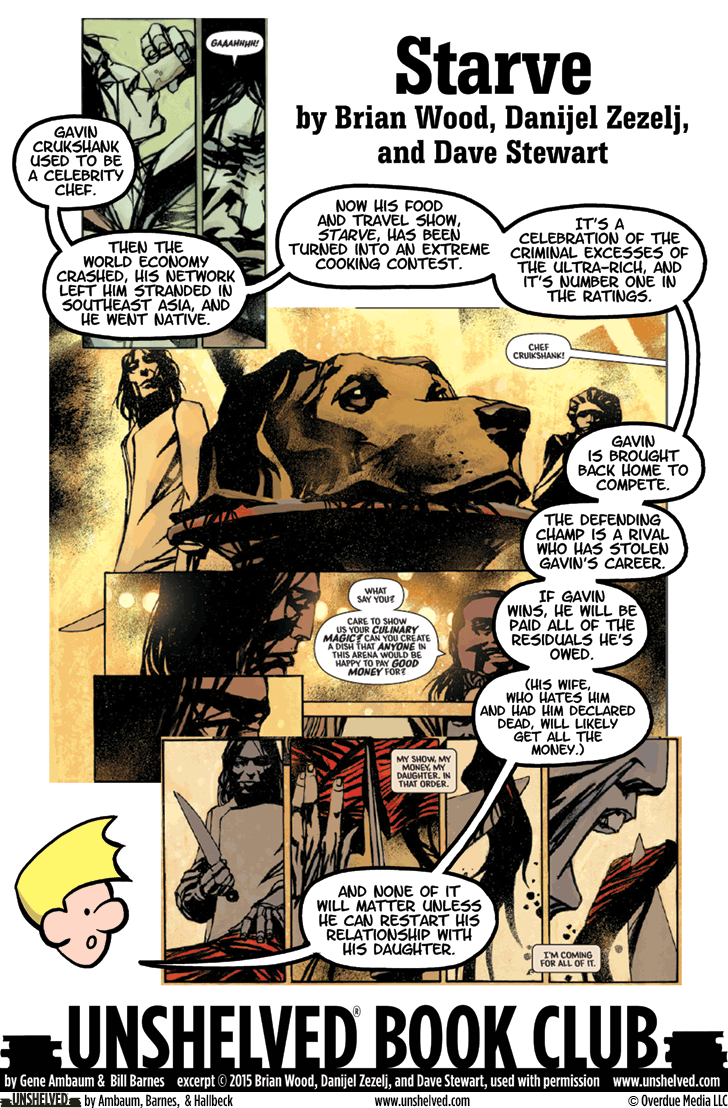 Link to this review by craigseasholes tagged fantasy • graphic novel

Russian folklore is filled with stories of the terrifying, baby-eating witch, Baba Yaga. In this full-color graphic novel, the ancient hag advertises for an assistant and finds one in Masha, a determined young woman who learned all about Baba Yaga’s tricks from her beloved Grandma.

Why I picked it up: I was hooked after reading the ad inside the book's front flap:

ASSISTANT WANTED ASAP
Must have skills in hauling, obeying orders,
cooking and cleaning. Magical talent a bonus.
Must be good with heights. Enter Baba Yaga’s
house to apply.

I thought, "What kind of girl would answer an ad like that?"

Why I finished it: Only a self-confident but somewhat desperate one. Masha’s dad has decided to remarry, and Masha’s not happy about her stepmother and the woman’s banshee-like daughter, Danni. She leaves the house to visit her mother’s and grandmother’s graves, and her grief conjures the giant, chicken-legged house of Baba Yaga. She confidently strides up the steps to answer that want ad from the paper, but Baba Yaga is full of tricks. Masha answers two challenges with resourcefulness and determination and then, when she discovers Danni among three captured children destined to be Baba Yaga’s next meal, she must find a way to free them.

Readalikes: Linda Medley’s Castle Waiting graphic novels re-imagine a fairy tale world with strong female characters like the pregnant Lady Jain (who is fleeing a bad marriage) and the bearded Sister Peace. Shannon Hale’s Rapunzel’s Revenge is another graphic novel that involves fairy tales and a confident female protagonist, in this case a traditionally forlorn and passive damsel in distress who is portrayed as a lariat-twirling adventurer out to set things right.

Ever wondered what it’s like to be a garbage man? Riding on the back of the truck looks fun, but the realities of overstuffed plastic bags, mountains of dog poop, inclement weather, and incompetent co-workers are hard to overcome. Derf Backderf takes readers behind the scenes of municipal trash pickup in this semi-autobiographical graphic novel. He punctuates his tale of condescending villagers and petty employees with facts about garage removal throughout history: early trash removal (or lack thereof), the rise (and pointlessness) of landfills, and the throwaway culture we’ve created that marks a terrifying future for our planet.

Why I picked it up: I loved Backderf’s earlier graphic novel, My Friend Dahmer.

Why I finished it: The combination of working-class humor and real-life information on the sorry state of waste disposal in the United States was a compelling if generally disgusting read. The extent to which “yellow torpedoes” (plastic drink bottles filled with urine) clutter our nation’s highways is something I never wanted to know, and now can’t un-know.

It’s perfect for: My friend Tim, a twenty-something college student who likes foul-mouthed humor and earthy-crunchy outrage. The “sumbitch” dog catcher will make him laugh, and the calls for better environmental stewardship will make him act.

Clara, a fresh young reporter for the nascent fashion industry in postwar Paris, lands the job of reporting on Christian Dior's first show in the winter of 1947. It's an amazing display, and an older reporter coins the famous phrase the "New Look" to describe Dior's revolutionary style. Clara's career goes sideways after an ill-fated photo shoot, but Dior invites her to become a model. Fame, fortune, and sadness await.

Why I picked it up: I've always had an interest in the fashion industry.

Why I finished it: Goetzinger's illustrations are clean and crisp, just like Dior's dresses, and her use of color, such as when a new collection is introduced and needs to be shown as both bold and understated, is masterly. And there’s a lot of tension in the story. After the war, Dior and his clients may have been wealthy, but most French people were still living hand to mouth. In an early scene, Clara is staging a photo shoot at a farmers’ market. When one of the models casually bites into an apple, the poor vendors go nuts because food is still being rationed.

It’s perfect for: Marina, who would be surprised to learn of an American group of women who actually wanted the skirts from the first collection to be shorter (they considered Dior’s long skirts constraining and oppressive). She'd also love the drawings of all the different dresses throughout the years, and the glimpse behind the scenes at how the industry operates.

Mark, a mild-mannered accountant, is secretly a superhero, the Crusader. Things have gotten serious with his girlfriend, Abby, so he tells her his secret. Their relationship quickly turns into a romantic comedy.

Why I picked it up: I was in the mood for something different, and it looked like the polar opposite of the dark, moody, violent superhero graphic novels I usually read.

Why I finished it: It was originally published in half-page increments on Mahler’s website, so every page has a laugh or two. Just after Mark reveals his secret, Abby realizes how fast he can fly. Fifteen minutes later they’re in Hawaii. (The next day her sister is trying to figure out why Abby has a tan.) At a wedding where someone starts singing “Shatner bad,” Mark tells Abby to be glad she doesn’t have super hearing. And when visiting Atlantis with other heroes, Mark scolds Abby for putting her foot in her mouth. “When the Prince of Atlantis asks you if you like fish -- you do not, under any circumstance say -- ‘Yes, grilled with a nice butter sauce.’” (Those are just a few of my favorites.)

Readalikes: The only other romantic graphic novel I’ve ever read that has this level of sincerity, True Story, Swear To God by cartoonist Tom Beland. It’s the story of how he fell in love with journalist Lily Garcia at a bus stop and moved to Puerto Rico to be with her.

Link to this review by flemtastic tagged comic strips • nonfiction

Krause became well known for creating comics of his deepest fears. Fans enjoyed them so much that they began sending him letters describing their own fears. (The book includes a selection of both Krause’s own and reader-submitted fears.) But because the fears featured in the book are very, very unlikely, this is coffee table material that will bring a smile to anyone's face.

Why I picked it up: One hundred strange fears collected and visualized? It’s a funny concept.

Why I finished it: Everyone I’ve shown this book to identified with at least one of the fears inside, though some are really strange. One of the weirdest features a picture of a chicken’s head poking out from a person’s butt crack. It resulted from a woman’s fear that others were reading her mind and laughing at her. To test for possible mind readers she imagined funny images (like the butt chicken) to see if anyone nearby laughed.

And I share a few of these fears. At the risk of letting others know my deepest and darkest, I worry about someone opening a door and hitting my arm while I’m using a Q-tip to clean my ear. I also fear having my tongue bitten off in an accident and then not being able to tell EMTs what happened.

It’s perfect for: I have a self-admitted neurotic friend who will adore this book. I know for sure she has worried about #43, where someone wheeling a hand truck behind you clips your Achilles tendon and severs it.

On the remote moon Avalon in the year 2843, the despotic regime has fallen. Refugees are trying to find transportation off world, there is no law, and food riots are the norm.

Journalist Croger Babb is there looking for a story. He finds a manuscript written by Maia Reveron to set things straight about her cousin Arthur McBride, the now former dictator. It begins by detailing events forty years earlier when they fled indentured servitude together. During an encounter with three soldiers on a beach, Arthur killed two and assumed Maia had killed the third. But she hadn’t, and when the survivor was interviewed on the newsfeeds, Arthur McBride had nowhere to hide.

Why I picked it up: I was in the mood for a gritty science fiction story when I came across this at my comic store.

Why I finished it: Croger Babb is willing to risk his life to get the story out. Despite threats, violence, and coming up against problem after problem, he persists. The parallel story from forty years earlier (in the manuscript) is equally compelling as Maia, on the run, is nearly killed in an explosion and starts to make a life. The only thing that could derail her newfound freedom is when she crosses paths with her cousin Arthur once more.

It’s perfect for: My friend Dave, who keeps bees. Maia’s new life (and the source of her freedom) is beekeeping, and I think Dave would be fascinated by the bits of backstory about how they adapted to life on a new world.

Link to this review by sarahhunt tagged biography • graphic novel

Pascal, getting over a breakup, is staying with friends in a room he shares with a massive papier mâché head of his ex. He has been unable to draw any comics. When he spots a woman in a store shoplifting one of the books he wrote, he's both horrified and flattered. He decides to become an amateur detective and stop this serial book-stealer. Then he becomes obsessed with her as a potential rebound girlfriend.

Why I picked it up: I liked the author's mastery of the uncomfortable and awkward in Bigfoot. His wiggly drawing style is really cool, too.

Why I finished it: Pascal deals with his breakup in the worst ways possible -- he decides to change careers, maybe go back to school, and immediately starts thinking about a new relationship. He's almost beaten up by the world for his misguided coping strategy: he gets injured over and over again at his new welding job, and is so absorbed in thinking about the woman that he slams into people on the street.

Readalikes: This is a more slapstick version of Silver Linings Playbook. Pat Peoples in Silver Linings wants to fix his relationship through intense physical training. He ignores the emotional pain he's endured and the advice of his friends to let go of his fixation on his ex. At one point in Petty Theft Pascal wants to train to run a marathon so he can get a runners high and take his mind off his misery. He immediately injures his back and has to get painful physical therapy. His medical team tells him to be patient and allow his back to heal. His friends tell him to be patient and allow his heart to heal. Like Pat Peoples, he just won't listen, either.

Abby, Matt, and Kitty Sweet Tooth prepare you for your trip to Japan with practical tips on packing, eating, laundry, and having fun.

Why I picked it up: I went to Japan for the first time last year and I already want to go again. The graphic novel format looked cute and non-threatening.

Why I finished it: I found out some practical stuff I wish I had known for my last trip, like how to find my way on the many overlapping train and subway systems and what to do with street food wrappers when there are no trash cans anywhere. There was also a whole lot of really fun stuff, like how to navigate the massive hot-tub theme park in Tokyo, how to visit the Ghibli museum, and going to the big comics conventions like Comiket and Comitia.

It’s perfect for: Alan, the former skateboard entrepreneur on my Japan Tour: he'll dig the rundown of where to shop for the best manga, toys, and robot models.