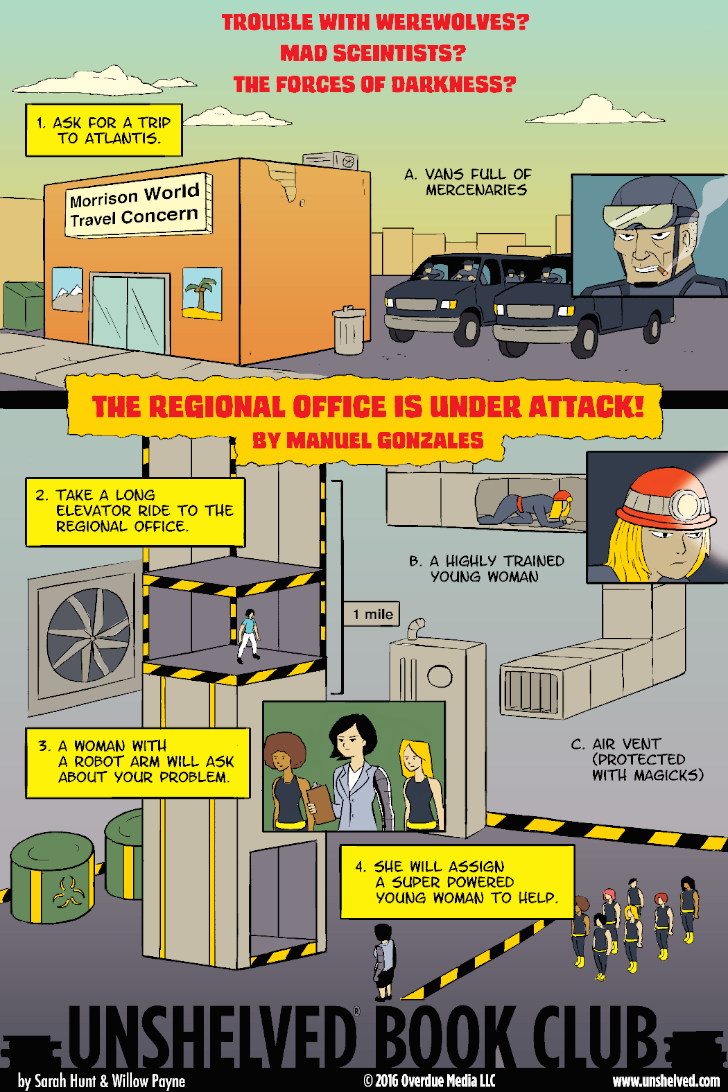 Link to this review by sarahhunt tagged graphic novel • nonfiction

Hurricane Katrina and the wall of water at its eye overwhelmed the systems that kept low-lying New Orleans dry. The worst problems in the days and weeks following the storm arose not from nature but from the many agencies that wanted to help yet couldn't agree on which was responsible for what.

Why I picked it up: I vividly remember following the storm and the humanitarian disaster as it was reported minute-by-minute on the news. I wanted a fuller picture of what happened.

Why I finished it: The illustrations in this graphic novel helped me to understand what a storm surge was, why it was so devastating, and how people ended up drowning in their attics as they fled the rising water to upper stories in their homes. (In general they could only escape if they cut holes in their roofs.) Included are personal stories of witnesses, victims, and others trying desperately to save lives. And the book brought remaining questions into focus: Why was help turned away? Why were people fleeing the city turned back by police? Why were the people in charge unaware of so much that was being reported in the news?

“I am Mary Iris Malone, and I am not OK.” Mim Malone is on a quest to see her mother in Ohio. (When her mom and dad divorced, her dad remarried and moved his new wife and Mim to “Mosquitoland” (aka Mississippi). For a while Mim received weekly letters from her mom, but then they suddenly stopped. After some snooping, Mim believes her mom is ill and desperately needs her. Convinced that her stepmother and dad want to keep them apart, Mim swipes some money and hops on a bus to Ohio.

Why I picked it up: I love books about troubled teens out to find themselves. I had heard from several colleagues that this one was funny, sad, and ultimately inspiring. It sounded like the perfect audiobook for my commute.

Why I finished it: Mim is a colorful character with all sorts of issues. She’s witty but clearly troubled, so much so that she’s on medication prescribed by one of the many psychiatrists her father has sent her to see. She’s also hurt, angry and even scared of what she might find in Ohio. Mim encounters many characters on her journey, some frightening, some sweet, some extraordinarily cute, each with their own issues. Phoebe Strole, the young actor that reads the story, captures Mim in every permutation. I was so enthralled by her voice that several times I even sat in my car and listened even though I had arrived at work.

It’s perfect for: Melanie, one of my students, will certainly appreciate the quirky characters, but will really enjoy the growth and strength Mim shows as her experiences change her attitude towards her family and herself.

Maddie has a strange ability -- she sees numbers on people's foreheads. After her father died when she was in first grade, she realized that the numbers represent a person’s death date. She wonders if she could have saved him, and has lived with the guilt ever since. Now a teen, she does death date readings for people to earn extra money.

When Maddie does a reading for a mother and her daughter, who is dying of cancer, she notices that the woman’s son will die in the next week. She tells her in the hope that the woman can prevent his death. But after he is brutally murdered, Maddie and her best friend, Stubs, are accused of the crime. Circumstantial evidence against them mounts when a cheerleader Stubs has been crushing on is also killed.

Why I picked it up: I was in the mood for a mystery. This one finally came back to my library after being passed around by several students, the last of whom dropped it off with, "You have to read this, Mrs. C!" They’re usually right.

Why I finished it: Things looked bad for Stubs, who was put in an adult prison and beat up while awaiting results of a DNA test that might clear him. Would he be okay? Would the real killer be caught? I also wanted to know if Maddie's alcoholic mother could turn her life around, or if she would continue to put too much responsibility on Maddie.

It’s perfect for: Kinsey, who likes her mysteries more suspenseful than gory. The murders happen off page and are revealed during the FBI questioning, so we don't witness the violence.

Link to this review by geneambaum tagged history

“There was nothing understated about Jim Crow during that long, blistering century between the end of Reconstruction and the seminal legal victories of the American civil rights movement. Racist imagery essentializing blacks as inferior beings was as exaggerated as it was ubiquitous. The onslaught was constant.”

-- from the foreword by Henry Louis Gates Jr., Harvard University

For decades, sociology professor David Pilgrim has collected “items that defame and belittle Africans and their American descendants” as “pitiable exotics, cannibalistic savages, hypersexual deviants, childlike buffoons, obedient servants, self-loathing victims, and menaces to society.” His collection is housed in the Jim Crow Museum of Racist Memorabilia at Ferris State University in Big Rapids, Michigan, where Pilgrim teaches. Its mission is to “engage visitors in open and honest dialogues about this country’s racial history [and] to use items of intolerance to teach tolerance and promote social justice.”

Why I picked it up: It’s always been hard for me to understand the reality of life in the Jim Crow era for African Americans. I thought this would make a connection for me, since I collect ephemera and toys.

Why I finished it: It did. The photos of lynchings and murders are shocking, but no less so than the postcards featuring African American kids being eaten by alligators. In antique stores and gift shops in Korea, I’ve seen items like the ceramic figures that caricature African Americans, but I never really understood how widespread such images were in American culture, and the images’ impact. It was hard to look at these items and think that, if I’d been born decades earlier, I wouldn’t have thought about them twice, but I know it’s true -- my grandparents’ home contained a few things pictured in the book. I didn’t remember them, and had clearly never come close to thinking deeply about them and the attitudes they portrayed. But now I’m trying.

What I’m going to do with it: This is that painful type of book. I know people who should read it, or who I hope will read it, but wrapping it up and giving it to them for Christmas isn’t going get them to open it. So I’m going to leave it around my house as I continue to reread bits of it, in the hope that other folks will pick it up and be drawn in as I was.

Link to this review by murphy'smom tagged coming of age

On Angie Favorite’s eleventh birthday her mother Laura dropped her and her older brother off at school and then disappeared. The authorities investigated, but in the end they figured Laura simply ran away, started a new life, and did not want to be found.

Five years later, Angie is brutally assaulted by a man obsessed with her mother. He has something to tell her, but hangs himself in jail before Angie can find out what it is.

To try and make amends for her son’s actions, the man’s wealthy mother offers to pay for Angie’s college tuition. A visit to the woman’s estate will lead her to the secret her son wanted to share.

Why I picked it up: I wanted a quick read after work, and the author's dedication, “For Mom, who said Favorite was her favorite” grabbed my attention.

Why I finished it: Favorite is full of realistic conversations and fighting between siblings. The book is not a fairy tale by any means because it deals with obsession and abduction, but I did want to know if it had a happy ending just the same.

Readalikes: Girl, Stolen by April Henry which is about Cheyenne, a fifteen-year-old blind girl suffering from pneumonia who is kidnapped from her father's car when he goes into the drugstore. And Room by Emma Donoghue, in which Jack tells the story of him and his Ma and the shed he’s never left.